More have been crowned this year’s champions of House University Challenge, just stealing the trophy from rivals Austin in a closely fought final.

Princethorpe’s competition is based on the long running, popular TV quiz show but in the College’s University Challenge, teams are also required to have representatives from each year group.

After the first two rounds of the competition More and Austin topped the leader-board with two wins a piece, having proved their expertise in subjects such as science and nature, music and popular culture and food and drink.

Quizmaster for the final was our very own Jeremy Paxman, Deputy Head - Academic, Dr Michael Reddish, asking the infamous starter for 10 and follow up bonus questions.

Overseeing the whole event, the troublesome buzzers and keeping on top of all the scores was House Activities Leader, Jess Newborough.

In a nail-biting lunchtime match first Austin and then More edged into the lead.  With just the final question on quotations left to go the teams were only five points apart.  More were quickest to buzz in and answered correctly claiming the last few points and overall victory, a reversal of fortunes from last year.

After the event Mrs Newborough could barely contain herself as she commented, “That was one of the most exciting University Challenge competitions the College has ever had.  It was so close, both teams have been brilliant and that match could have gone either way.  Thank you to all of the pupils who have participated in this year’s competition.  It is very different on stage to when you are in the audience or watching at home”.

Thanks also to the staff who have helped support the competition.

The final results were as follows:

Benet House is this year’s recipient of the St Hildegard House Award for Academic Endeavour and Attainment, an award that celebrates the effort and attainment of pupils in each and every class across the school.

Taking its name from St Hildegard von Bingen, a visionary Benedictine nun who was declared a ‘Doctor of the Church’ by Pope Benedict XVI in 2012, the St Hildegard award is presented annually to the House that receives the greatest number of Endeavour and Teacher Awards.

Director of Studies, Dr Michael Reddish, commented, “The school places the commitment to be kind and do your best at the forefront of all it does and acknowledges and celebrates these values in a whole host of ways, including systems of merits and rewards.  Twice a year, in the Trinity Term and the Michaelmas Term, we present Endeavour Awards and Teacher Awards to recognise pupil academic effort, attitude and attainment.”

In the last year 1,862 Endeavour and Teachers Awards have been presented to pupils and in the whole school assembly on Monday 28 January Dr Reddish revealed the final House totals.  Michaelmas top award winning pupil, Year 7, Jack Dando, who himself received nine awards, was invited forward to receive the trophy on behalf of Benet House.

Dr Reddish added, “This year we had a number of pupils who won multiple awards, but every award contributes equally to the overall House totals.  The final results were very close with just 24 points between 1st and 3rd place.  I hope that spurs all our pupils on to greater endeavour and achievement.”

A list of the top Michaelmas 2018 award winners is attached here. 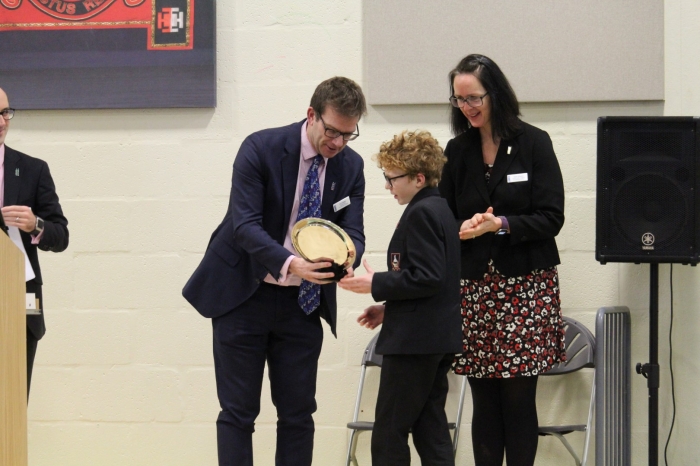